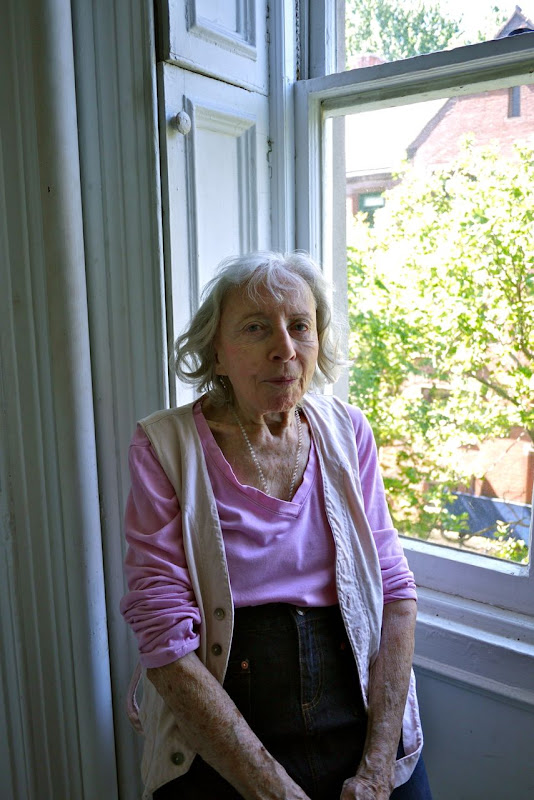 A few years ago, while spending a month in San Miguel, Mexico, I met a very nice couple from Seattle, and in telling them what I do and recommending a few books, I found out that they had just - that very week - purchased a drawing by the illustrator of one of my favorite children's books, right there in a gallery in town. That is how I came to own a Madeleine Gekiere original for myself, and how I came to possess her contact information.

Four years later, on a day that just happens to be the day after the author of that favorite book died, I finally had a chance to ring her door bell and sit down for a chat with an incredible artist, a lovely woman, and generous spirit.

Born in Switzerland in 1919, Madeleine Gekiere came to America when she was just 20 years old. "This was the Hitler days," remembers Gekiere. "It looked liked Switzerland might be invaded. We were Jews, not in any sense of believing, but as you know, the Germans didn't make a difference. I graduated from school in '38, I was scheduled to go to England to continue, as at that point I thought I was gonna be a fashion artist. So, I went over and by the time the war broke out, I'd had my first love affair. I was torn between my lover and my parents who were raising hell, bombs were beginning to drop, so I let them persuade me back to Switzerland. We eventually came to America because it looked too dangerous to stay."

Her family fled to New York, where Madeleine aspired to be in fashion. "I was not really developed as an artist. I was trying to be a fashion artist, but I was really lousy at it. You don't know how to function when you are first starting out to things." She studied at New York University, the Art Students League, and Brooklyn Museum School, and eventually found her way as an artist, as a painter and sculptor, and began showing her work at the Babcock Gallery in New York in the 1950s. 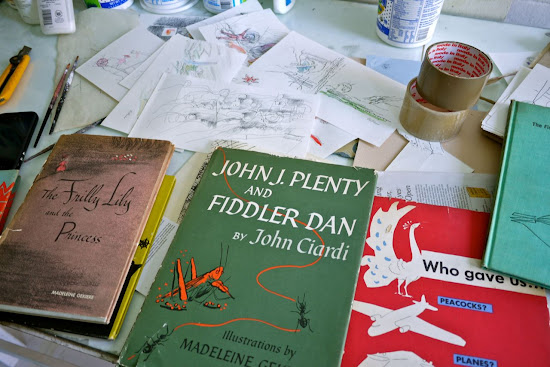 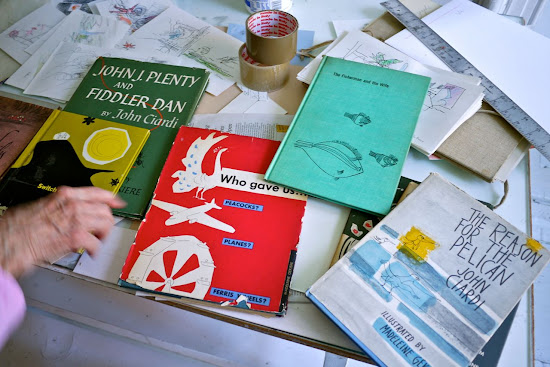 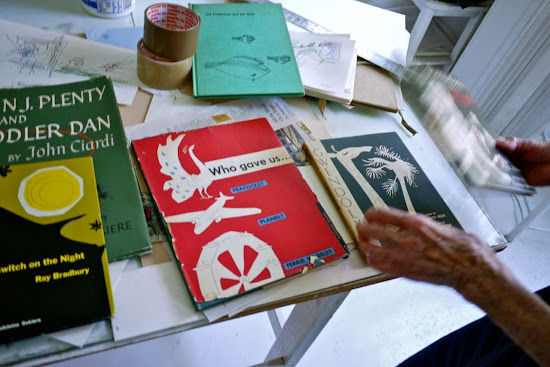 It was during this time that she met the woman who would introduce her to the world of children's books. "Helen Sewell (the famed children's book author and illustrator) lived in the same house as we did. We were friends so she got me into this and then we did one together."

In ten years, Madeline illustrated many books for others and two that she both wrote and illustrated (The Frilly Lily and the Princess and Who Gave Us...?) Five of her books went on to be named by the New York Times as one of the Ten Best Illustrated Books of the Year. She illustrated several books for the poet John Ciardi, but felt she had "nothing to say or decide on those... the process was so restricting, I felt like I couldn't do my very best work. That's why I quit," Madeleine remembers. "You had to make color separations and all of that. It's changed now, but at the time I didn't want to deal with it, as an artist." 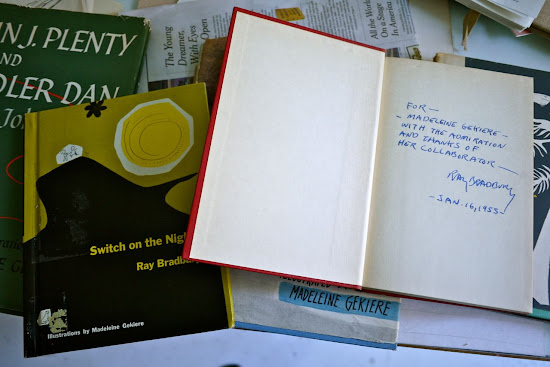 In creating Switch on the Night, she never met Bradbury, but simple drew the story how she saw it. "I never got any royalties on my other books... they simply paid me a lump sum. But, Ray Bradbury, no problem, he shared profits... just a very nice man. Even then he was a big shot. But he sent me an inscribed book (a first edition Fahrenheit 451) and was so generous. He didn't owe me anything." 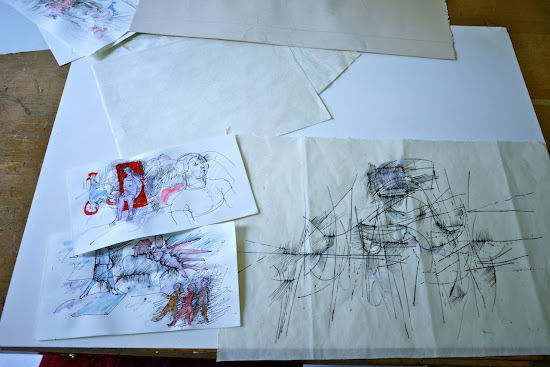 Madeleine went on to become a successful artist and taught painting at City College in New York for more than 23 years. She made experimental short films during the 70s and 80s, and recently, the Anthology Film Archives screened her collection including the 1980 film Chewing, which I remember seeing in a show when I first moved to New York in the 1990s. Her work is part of the permanent collections of the Art Gallery of Ontario, the Baltimore Museum of Art, the Brooklyn Museum of Art, the Cleveland Museum of Art, the Dallas Museum of Fine Arts, and the San Francisco Museum of Art. 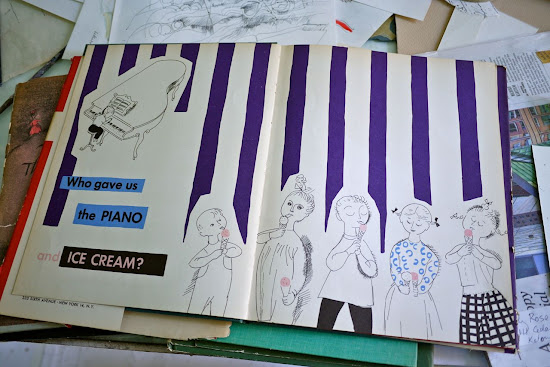 At 93 years young, Madeleine is still living on her own in New York in the brownstone she purchased with her husband (the actor, Paul Potter), and she creates everyday. "Who the hell is even interested in all these books?... I can't believe it, that I got to be this old," she says with a laugh. Her favorite book she created was Who Gave Us? as she feels she was "making a social contribution, by saying everybody's contributed to the culture."

Her latest solo show was in February at the Fred Torres Gallery. And though she might not truly know it, I, for one, give a damn.

After looking at her glorious illustrations and books, I know you will, too. 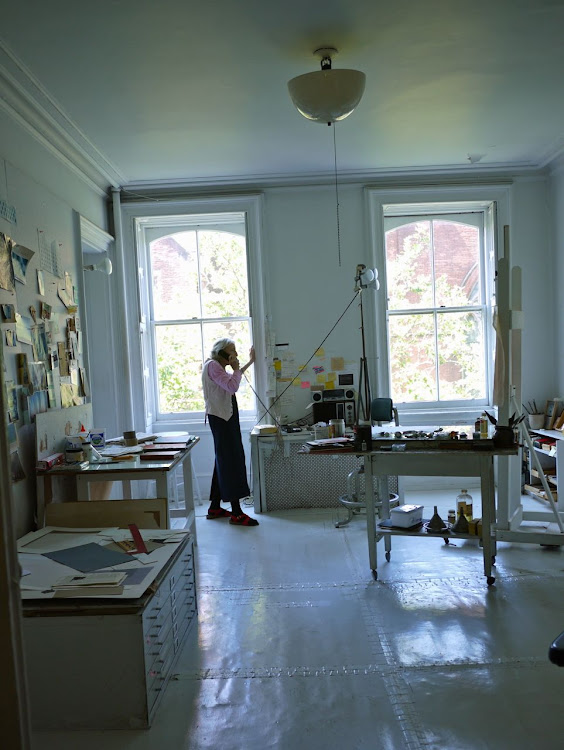