Tommy’s Trip to the Moon

Am in NYC, so my friend gef over at Lost In Texas and The Kindergarten Diaries has graciously offered to review a few of her more obscure and choice titles. Welcome her and observe... 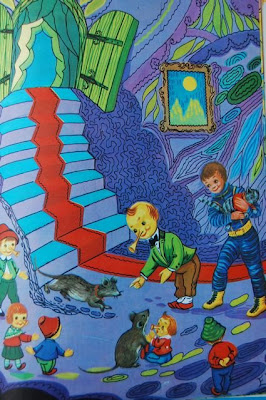 TOMMY'S TRIP TO THE MOON

Apparently, this is a pretty obscure children’s book, which I picked up at a Half Price Books here in San Antonio. I was attracted by the vivid, surreal illustrations and by the subject matter. I love boy-wants-to-go-to-moon stories (though it would be nice to read a girl-wants-to-go-to-the-moon story for a change), especially those that were written long before Neil Armstrong set foot on that great big ball of cheese. There’s just something lovely about the naiveté of the pre-space-race books, when the imagination could really run amok about the moon and its secrets. So much more thrilling than reality—like, where are all the moon men anyway?—especially now, in the era of budget cutting and NASA blundering. 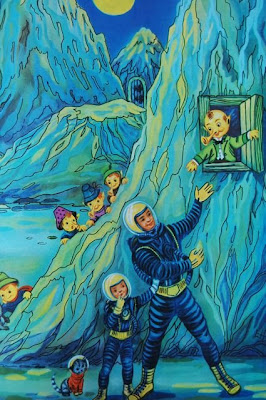 The writing, a bit dull and repetitive, isn’t really anything special; it’s the pictures that transport. We open with Tommy, who’s having a marvelous birthday party with “sandwiches and jellies and lots of lemonade” and who gets to stay up way past his bedtime to celebrate. He eventually passes out with his favorite gift—a rocket, of course—on his nightstand. Suddenly, he is awakened by a voice: 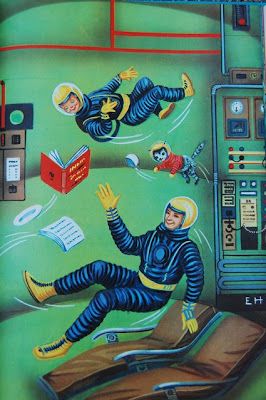 Tommy blinked—and blinked again. He just couldn’t believe his eyes. For there, standing beside his bed in the bright moonlight, was a Space-Man.

Tommy rubbed his eyes and looked again. Yes, the Space-Man was still there. And then Tommy saw that he was holding out a space-suit, which was just his size. 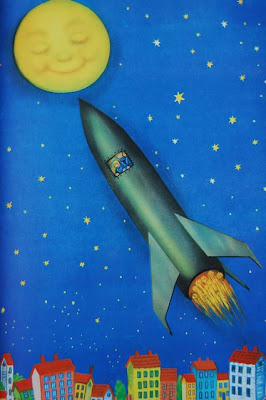 Turns out, Tommy has been chosen by “the Space Fleet” to be the first boy on the moon, and his escort will be the “Space-Man,” whose name is Captain Dan. After getting a brief explanation on how the suit works and a rundown on the hazards of space travel (it’s all about the gravity, people), Tommy and Captain Dan board the rocket that awaits them in the village square, wave good-bye to the gathering townspeople and take off on their fairly uneventful trip to the moon. Once there, Tommy finds the object of his obsession to be made of “strange yellow rock and there was no grass or trees or any sign of life at all.” Which all sounds pretty accurate… until he notices doors and windows in the rocky hillsides—and a “happy little moon-man” waving at him. 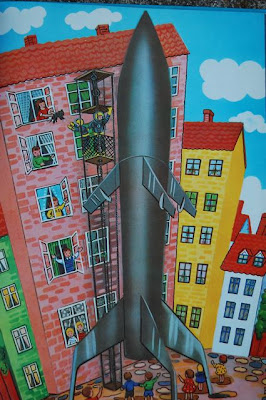 He had wondered what the moon-people would look like and he was so pleased to find that they were very much like the people on earth.

They were much smaller than earth-people, and they wore very old-fashioned clothes made in bright colours. The only real difference that Tommy could see was that they had long noses which were shaped like trumpets.

As it turns out, the moon-folk can play their noses like trumpets, and they form impromptu brass ensembles when the occasion dictates. They also love a good party, and they keep oversized mice as pets. After the moon-folk throw Tommy a soiree, Captain Dan, who visits with them regularly, presents the leprechaun-like creatures with a parting gift: crates filled with the finest fromage from all the countries of Earth. Then they head back home, and as the rocket re-enters the earth’s atmosphere, Tommy is catapulted back to his bedroom. Dazed and wondering if this was all just a dream, he resolves to work for the Space Fleet when he grows up.

Featured in many of the illustrations is an adorable tabby kitten, who, wearing a striped sweater and a space helmet, accompanies Tommy on his lunar journey. The cat is never referenced in the text, which seems odd, and leads me to think this is a lame translation of the original Swedish story. According to the back page, this title is one of four in a series, including The Flying Motor Car, Linda’s Curious Toys, and The Wandering Donkey. If anyone knows about them or about the illustrator, do share, because these books appear to be as rare as a moon-man who doesn’t like cheese. 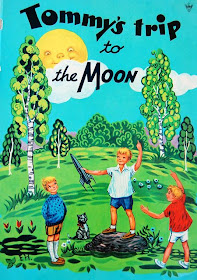